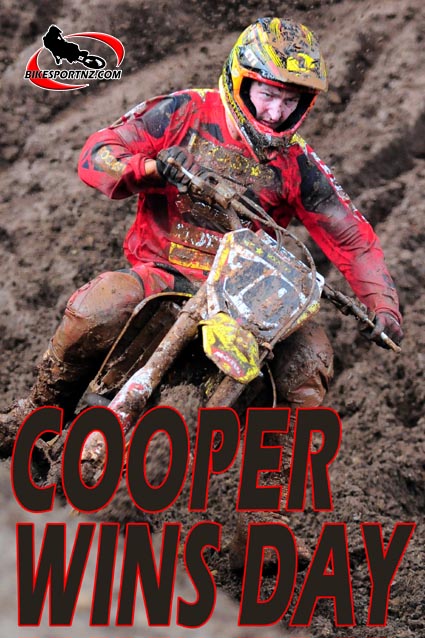 Cody Cooper is back.

Still on the comeback from injury, the Suzuki ace from Mount Maunganui took the top step on the podium at the fifth round of nine in the Australian Motocross Championships at Toowoomba on Sunday.

The Rockstar Motul Suzuki team rider finished 1-2-1-3 in his four races at the steep, rain-drenched and deeply-rutted circuit, widely considered one of the most demanding tracks on the tour.

Forced to watch round three from the sidelines after crashing and suffering rib and lung injuries at round two of the series, Cooper (RM-Z450) bounced back at round five on Sunday in impressive fashion, showing mastery in the slick and treacherous conditions.

However, with the championship now edging past the halfway stage, Cooper also realises that, despite today’s superb display, he has little realistic chance of winning the title this season.

Although Cooper has improved several positions from 13th overall at the start of the weekend, he is still only eighth overall, a massive 166 points behind championship leader Dean Ferris (Kawasaki), who finished third overall on Sunday.

“It was just so good to be able to race and be competitive,” said Cooper. “I have not been able to ride the bike much lately, although I am not now in any pain.

“I am still not at my best,” he said, an obvious warning to his rivals with four rounds still remaining. Round six is next month (June 19) in Coonabarabran, New South Wales.

It was not very obvious to any of the several hundred damp and mud-spattered observers, but Cooper admitted he too struggled staying in control on the slippery terrain.

“I can rider better than that. I think the secret today was just to be smooth and not make mistakes. The bike was brilliant.”

Ferris finished 2-4-4-2 on Sunday, ensuring he remains nine points clear at the top of the championship standings, although it is now Monster Kawasaki team-mate Bill Mackenzie who has moved to closest to challenging him as Kiwi Josh Coppins (CDR Rockstar Yamaha) has a trying day at Toowoomba, finishing the day only fifth overall and slipping to third in the standings.

Mackenzie finished 4-1-3-1 on Sunday to earn the runner-up spot, while former world No.2 Coppins managed 9-5-5-5 placings.

Coppins nailed the holeshot in race one but was in turn nailed from behind by another rider, which sent him tumbling and forced to start from last spot. He showed remarkable skills to power through the slop to claim ninth at the end.

“To tell the truth, I was really only ever good for fifth overall today,” said the 34-year-old Coppins. “I’m not going to blame anyone for that. I just wasn’t comfortable in the mud today.”

For former GP rider Ferris, it was another solid weekend.

“This is my fourth podium in a row, so I’m stoked,” Ferris said. “We have the points lead and that’s the main thing, but I’m looking to get a win. I’ve been on the podium four times in a row, so a win is what I’m looking for now, that’s for sure.”

Meanwhile, it was double glory for the Rockstar Motul Suzuki men as Cooper’s team-mate, Daniel McCoy, took the top step of the podium in the Lites (250cc) class.

McCoy – who raced in New Zealand earlier this season, finishing runner-up in the MX2 championship – won the abbreviated Lites programme with his 2-3-2 results.

Series leader Matt Moss (KTM) had a lacklustre day by his standards and yet he still holds a solid lead at the top of the standings.

Moss finished the day only 16th overall but. His lead has been shaved by 10 points, but he is still a respectable 27 clear of his main rival, Yamaha’s Kirk Gibbs.

“Sadly, water made its way into the bike’s electrics system in moto one and caused mayhem. This unavoidable problem caused me to DNF. The conditions on the circuit were so bad that the organisers of the round cancelled the second moto for the class.

“Today was a solid day for me achieving my first podium result of the series with third overall,” said McDonald.

“I enjoyed the track today and felt good running up near the front. I feel like I am gaining more speed as the series rolls on and am ready to challenge for race wins for the rest of the series.” 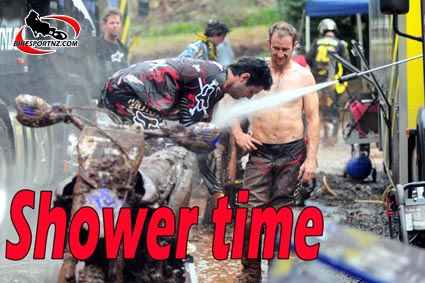 Championship Standings (after 5 of 9 rounds):