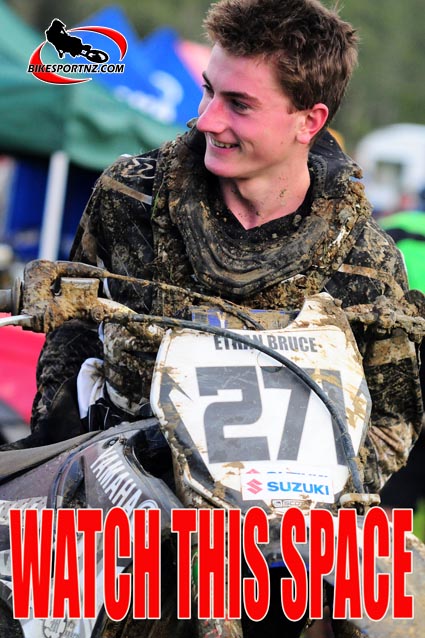 Marlborough’s Islander Ethan Bruce made the big trip north this season – two of them actually – and showed it’s probably only a matter of time before he can be a national champion.

The Yamaha ace from Maruia, near Lewis Pass, was virtually unheard-of before the New Zealand Cross-country Championships kicked off near Blenheim in April, but by the fourth and final round in Taranaki at the weekend, everyone knew well of the 15-year-old rider’s skills on a dirt bike.

The Marlborough teenager took his 2009-model Yamaha YZ125 to fourth overall in the junior class on Saturday, good enough for him to finish the series runner-up overall, although he’ll get no reward or recognition for that effort after failing to meet the strict qualifying criteria.

He was required to race in at least two of the South Island Cross-country Championship events to qualify to race the nationals, something he neglected to do.

So it was perhaps with very mixed feelings that he weathered the icy rain squalls and clinging mud in Taranaki on Saturday with no prospect of a prize in sight.

It was all good experience, however, for the teenager, a boarder and year 11 pupil at Nelson Boys’ College.

“It was pretty hard following other riders in these conditions but the track was nice and fresh. It was horrendously muddy and I went over a bank and lost a few positions at one stage.

“With this year’s champion (Raglan’s Jason Dickey, Kawasaki) going up to the senior ranks next season; perhaps that will make me one of the favourites for next year. Who knows?

“I really don’t want to be thought of as a favourite, though, because everyone’s always trying to knock you off.

“This is my best result in a major contest and it was my first time of racing in the nationals too.”

The 16-year-old Dickey finished an unaccustomed 18th overall on Saturday when his drive chain snapped on lap two, while he was leading the race.

“I had already won the series, so it didn’t really matter, although I really would have liked to have made it a clean sweep,” he said. 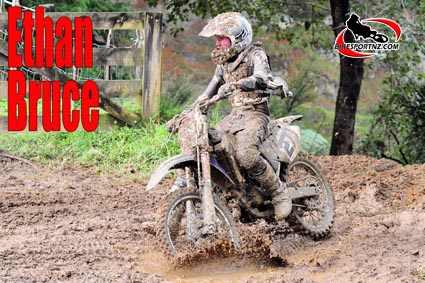