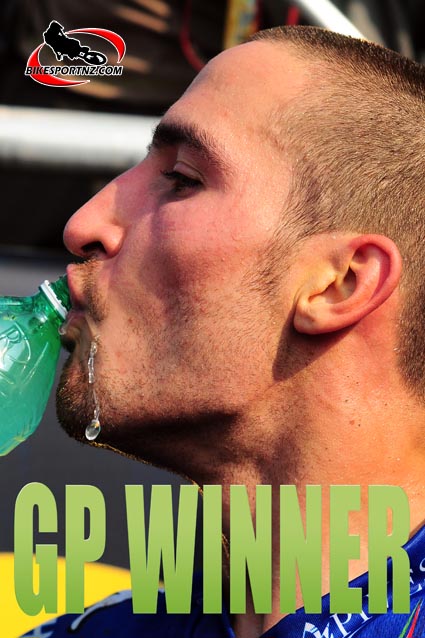 Italian former world champion David Philippaerts obtained the first overall MX1 motocross world championship victory of the 2011 season at Indaiatuba, Brazil, on Sunday, while Jeffrey Herlings beat his team-mate Ken Roczen and got his second GP win of the season.

Yamaha’s Philippaerts got the perfect weekend, winning the qualifying race on Saturday and obtaining the overall win on Sunday. Second was fellow Italian Antonio Cairoli and third was red plate holder Clement Desalle, on Belgium.

In the MX2 class, Dutch rider Jeffrey Herlings got an eventual GP win and he finished ahead his German team-mate Ken Roczen. French rider Gautier Paulin finished third and got the first podium of the season.

Monster Energy Yamaha’s Philippaerts was extremely happy after such overall victory. The Italian had not been really fortunate in the last Grand Prix’s and such result will help him to increase his self-confidence. Philippaerts got really valuable points for the championship and he is now fourth ahead his team-mate Steven Frossard.

Second overall was Red Bull Teka KTM Factory Racing MX1’s Cairoli, who has succeeded in closing the gap with the Championship leader Desalle. Cairoli would have won the GP if he had not made so many mistakes on the track on the second race, as he had won the first one.

Rockstar Energy Suzuki World MX1’s Desalle got a bittersweet third overall position. On the first race, Desalle started at the back of the pack, but he did an amazing recuperation and managed to be second overtaking Phillipaerts and Frossard at the same time. Unfortunately, he made a mistake and finished fourth. In the second heat another mistake made him lose the leadership and finished again in the fourth position.

Fourth overall was Monster Energy Yamaha’s Frossard who finished tight in points with third classified Desalle. The French finished third in the first race, but in the second one he had some pain on his thumb and decided not to take risks and keep the fourth position.

Completing the top five was Steve Ramon, from Rockstar Energy Suzuki World MX1, thanks to his third final position in the second heat. The Belgian rider is making great progressions on his Suzuki machine and he is now 10th in the point standings.

Germany’s Max Nagl was not that fortunate this weekend and he just finished sixth overall. However, the German is still second of the MX1 World Championship, eleven points behind the leader Desalle.

Belgium’s Ken De Dycker got a solid sixth overall position, followed by Frenchman Xavier Boog, who started really good in both heats but he could not keep the rhythm and finished ninth and eighth respectively.

Kevin Strijbos finished ninth and Evgeny Bobryshev could only finish 10th due to the numerous mistakes he made during both heats. His team-mate Rui Gonçalves also struggled in the Brazilian track and he finished just behind Bobryshev.

Italian Davide Guarneri did not take part in Sunday’s races as the doctor suggested him some rest after the heavy crash he suffered on Saturday during the qualifying race.

Jorge Antonio Balbi was the best Brazilian rider in the MX1 class finishing 19th position, but he could not finish the second race due to a crash he suffered right after the start.

Red Bull Teka KTM Factory racing MX2’s Herlings got a very important overall victory this weekend in Idaiatuba. The Dutch rider took advantage of the mistake Roczen made when leading the second heat and Herlings crossed the finish line in the first position. However, Herlings admitted that he needs to work hard once back in Europe to close the gap between him and Roczen.

Roczen, from Red Bull Teka KTM Factory racing MX2, won the first race easily, but he crashed twice in the second race and lost the overall victory. However, Roczen is still the leader of the series with 14 points advantage over Herlings.

Monster Energy Yamaha’s Paulin got his first podium of the season after finishing third in both heats. The French rider confessed he is very satisfied with such result because the hard work he has done with his team has been finally compensated.

CLS Monster Energy Kawasaki Pro Circuit managed to finish fourth overall, even starting from the very outside due to his disqualification at yesterday’s qualifying race. Searle is still third in the championship but he is now 35 points away the leader of the championship, Roczen.

American Zach Osborne completed the top five with two solid fifth results. Osborne starred in a couple of battles in both heats, first with Paulin and then with Tommy Searle, but his injured wrist did not let him push harder and stayed behind.

Max Anstie struggled a little bit in the Brazilian track and he finished sixth and seventh respectively. Christophe Charlier and Arnaud Tonus, who were both tight in 27 points, finished after the British rider. Ninth was Joel Roelants and competing the top 10 was Finnish rider Harri Kullas.

Hector Assunçao de Freitas was the best-qualified Brazilian rider in the MX2 class, finishing 13th ahead of Nicolas Aubin.