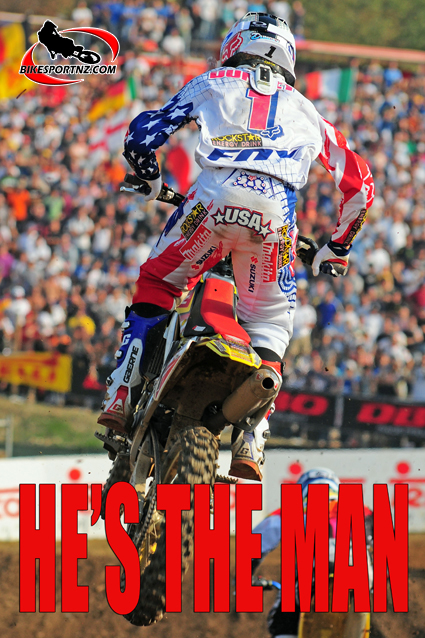 There were perhaps mixed reactions to be had following the weekend’s 10th round of 12 in this year’s AMA outdoor motocross championships in Massachusetts on Saturday.

Suzuki’s Ryan Dungey showed just the sort of dominance he will hope to take with him to the upcoming Motocross of Nations in Colorado but one of his Team USA team-mates, Honda’s Andrew Short, had a weekend from hell.

Short managed just 15th and 17th in his two outings, not the sort of form he’d like to see ahead of his representing his country against some of the best riders in the world.

The Americans can probably be thankful that the man who won the 250cc class at Massachusetts, South African Tyla Rattray, won’t be there to threaten them at Colorado in three weeks’ time — there is no South African team headed to the MXoN this year.

But the weekend in Massachusetts definitely belonged to Dungey.

Keeping up with the dominating trend he’s set this season, Suzuki’s Ryan Dungey raced to his ninth consecutive 450 Class victory by sweeping the day’s motos and in the process, secured the premier class title with two rounds remaining in the Lucas Oil AMA Pro Motocross Championship.

In the 250 Class, Kawasaki’s Rattray captured his second career victory.

Coming into the round at Moto-X 338 in Southwick, Massachusetts, with a 111-point advantage, Dungey needed to leave Southwick with at least a 100-point lead to capture the championship.

While misfortune struck his closest rival, Honda’s Short, Dungey encountered a stiff challenge from Honda’s Brett Metcalfe, of Australia, who also had a mathematical shot at the championship lead in third. Despite the effort of his competitor, Dungey prevailed to take moto one on the final lap and went on to dominate moto two.

“Yeah it’s kind of sunk in,” said Dungey after realising he was the 2010 champion. “It’s still pretty incredible and a dream come true but it really feels great to accomplish (the championship). I never thought I’d achieve all this at 20 (years of age). The whole season has gone by so fast and it’s all kind of a blur. I’ve just tried to take advantage of all the opportunities given to me because I know it can all go away at any moment.”

The event win and series title are historic feats for the 20-year-old rookie, who tied series legend Ricky Carmichael for the most wins ever by a rookie while also becoming the first rookie in the history of the sport to win both the premier AMA Supercross and AMA Motocross championships in the same season.

KTM’s Mike Alessi finished in the runner-up spot (3-4) for his second podium finish of the season while Yamaha’s Matt Goerke finished third (6-3), one year after claiming his first career victory at Moto-X 338.

Dungey’s lead now sits at 151 points over Short as he continues his pursuit of the most successful rookie season in AMA Motocross history. He also leads the division in average finish at 1.9 and laps led with 157.

In the Lites class, Rattray took his first career victory on US soil at the third round of the season and since then has used 2010 as a breakthrough season.

Throughout both motos, the South African was able take advantage of strong starts and challenged for the lead in each, but settled for a pair of runner-up efforts to secure the overall. The day was made extra special for Rattray with the birth of his first daughter earlier in the morning.

“Today was a tough day but I got my second overall win just like my first, by going 2-2,” said Rattray. “The sand is difficult but I seem to thrive in it. I have been looking forward to Southwick most of the summer and to come here and ride like I did is fantastic. This is something I will always remember, winning on my daughter’s birthday.”

Honda’s Justin Barcia capitalised on a win in Moto 2 to grab second overall (4-1) while his team-mate Trey Canard saw his four race win streak come to an end in third (1-9).

Kawasaki’s Christophe Pourcel, of France, leads the 250 class standings by 13 points over Canard with two rounds remaining. Canard holds the best average finish in the class at 4.1 while Pourcel has led the most laps with 101.

The 2010 Lucas Oil AMA Pro Motocross Championship heads to the penultimate round of the season next weekend with the FMF Steel City National from Steel City Raceway in Delmont, Pa., on Saturday, September 4.