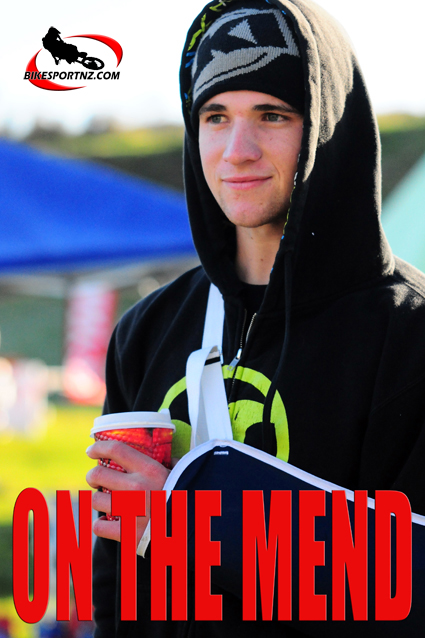 It has been a while now since New Zealand’s Rhys Carter has been able to race his bike.

He had been running among the top 15 in the MX2 class in the Canadian motocross nationals but was injured his shoulder at round three of the series.

Carter scored points at only the first two rounds and that was enough to see him in 12th spot in the championship standings after those two events.  He finished 12-12 at round one and 11-13 at round two.

But, with further progress impossible, the Kawasaki ace returned home to rest and recover and now reports that he is well on the road to good health again.

“I had surgery on my shoulder on July 1, getting a few plates and screws put through it. It has now been eight weeks to the day that surgery happened and I have been making a lot of progress which has been awesome.

“At the four-week mark I was going to see Carla Forster who is doing all my rehab work for me, which I am pumped on. I am excited to be working with her as she is amazing at what she does. Carla was slowly moving my shoulder at the four-week mark as I was still in a sling and she didn’t want to annoy what was happening inside the shoulder.

“Now at the eight-week mark I have been given the OK from the doctor to move it more and start trying to get the rotation back in it which is good.  Every day is getting better and better just taking one step at a time really, trying not to rush it so it can heal properly and so it won’t affect me in the future.

“Carla has given me until December 1 until I can be back on my bike at this point but, depending on how everything goes and I keep doing my exercises, I should be on track and back on December 1.

“As for now, I am just trying to keep my fitness up and start slowly doing more and more training as I am allowed to. I have got a whole bunch of coaching coming up which will be cool to help out the young guys and give them some tips from what I learnt while I was over in Canada, which will be a heap of fun watching them progress.

“I just want to say a big thank you to everyone for their support as I have been injured a bit over the last few years and you have stuck by me which means a lot. My luck is going to change and I believe I have the right people around me now which is going to be a big help and you will see a huge difference in my riding and you will see me up on the podium when I get back on my bike.”