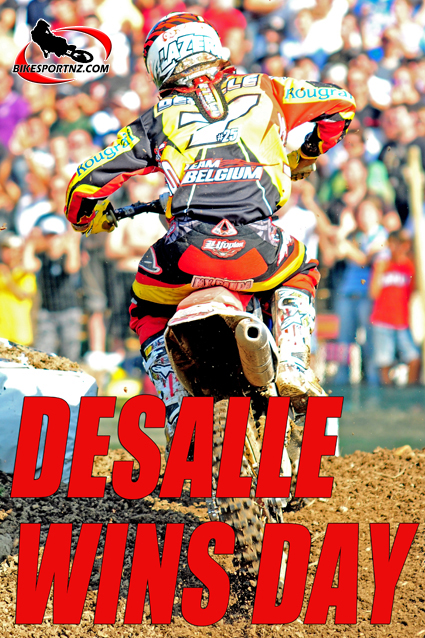 Belgian rising star Clement Desalle and Dutch teen sensation Jeffrey Herlings dominated the day at the Latvian round of the MX1 and MX2 motocross world championships at Kegums at the weekend.

For both young riders it was their second Grand Prix wins of the season.

New Zealand’s Josh Coppins (Aprilia) finished 14-0 in his two MX1 outings in Latvia and has now slipped one spot, to 14th overall, in the championship standings.

In the first MX1 moto, Coppins pulled a decent start, rounding the opening lap inside the top 15. Feeling good on the bike, Coppins battled it out with Rui Goncalves, Gareth Swanepoel and Kevin Strijbos, ultimately finishing the race in 14th position.

The second moto would see another solid start for the No.6 Aprilia, as Coppins quickly settled into a good rhythm. Mid way through, whilst battling with Strijbos, the chain came off the bike putting an end to the race for the frustrated New Zealander.

“The track was really good this weekend, very rough and bumpy but I enjoyed it and felt comfortable with the bike in the first race,” said Coppins.

“The second moto was pretty frustrating though, I was having a decent race when the chain came off.”

Securing the second career GP win courtesy of his victory in MX2 heat two, KTM’s Herlings took first overall ahead of Germany’s Ken Roczen (Suzuki) and Frenchman Steven Frossard (Kawasaki), all starring in a three-way battle for first in a dramatic final heat.

New Zealand’s Darryll King, who has raced to runner-up spot overall at the previous round on the veterans’ championships in the United States, was ca notable no-show. King was instead racing the MX2 (250cc) class in the Australian national championships at the weekend.

Even with his non-appearance in Latvia at the weekend and the fact that King has only contested one of the four rounds this season, he remarkably still finds himself 12th in the championship standings.

Narrowly missing out on the Latvia Grand Prix victory last year due to a technical problem, Desalle completed his mission this weekend and took also his second victory of 2010.

The Belgian charged hard in the opening moto to take a provisional second within the first half of the race, then moved on to pass a fast Evgeny Bobryshev and snatch the lead. In the final moto instead he settled to second behind Cairoli with the result being enough to earn the overall win.

A disappointed Cairoli took second on the podium behind Desalle. The Red Bull KTM Factory Racing MX1 rider struggled to pass two-time former world champion David Philippaerts in the opening moto and was impossible to catch the top three riders by the time he had moved up to fourth.

The Italian took his revenge by winning the second heat in dominant style and work his way up to the overall podium.

Ramon completed the podium, with the Suzuki duo sandwiching the championship leader on the podium. Ramon rode two steady motos to take two third places. The podium brought Ramon up to fourth in the championship while team-mate Desalle is second.

Honda’s Bobryshev narrowly missed his maiden podium finish. The Russian was about to win moto one when Desalle charged hard in the final laps and moved past. Bobryshev took second eventually but could not repeat himself in moto two, finishing a distant fourth. Ending level in points with Ramon, Bobryshev took fourth overall.

Kawasaki Racing’s Xavier Boog, of France, completed the top five ahead of Philippaerts and German Max Nagl, who got the holeshot in the final heat.

With only six points separating the top four riders of the Grand Prix of Latvia, Red Bull KTM Factory Racing MX2’s Herlings came out on top of the pack courtesy of his final moto victory and of team-mate Marvin Musquin’s crash at the start of the final heat.

Herlings started strong in the first moto to snatch the lead from holeshot winner Musquin but dropped down to an eventual third. Moto two was different as Herlings found himself in the lead of the first laps but Frossard came past to take the lead.

Before the race finished Herlings was back on top and won a three way battle for first with Frossard and Roczen to take the overall win.

Teka Suzuki Europe World MX2’s Roczen made it to second on the podium but was disappointed not to have started his attacks a bit before. In moto one the German came dramatically close to eventual winner Musquin only in the final laps and narrowly missed out on his second heat win of the season after Germany’s second moto. In the final heat instead Roczen was overtaken by Frossard and ended third.

Kawasaki CLS’ Frossard was an eventual third on the podium. With Musquin being  another candidate for third overall, Frossard had to work his way up to second in the final moto by passing Roczen and even troubling Herlings for the win otherwise he would have not been on the rostrum. In the first heat instead he was a steady fourth.

After a winning streak of five GPs, Musquin of Red Bull KTM Factory Racing MX2’s missed the podium and dropped down to fourth overall for the day in Latvia.

The championship leader took victory in moto one but a fall in the first corner of the second moto put him out of the potential winners’ list. Musquin recovered from dead last to an eventual seventh to give the crowd a demonstration of his impressive talent.